How we rated the Irons 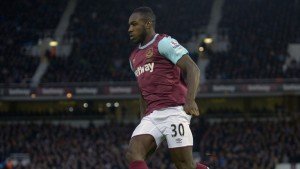 Adrian: Made one sharp save but his involvement in the mess for their equaliser killed all our momentum and the atmosphere 3

Byram: My records show I gave Antonio 2 for an equally bad performance earlier in the season. Turned inside out, booked again and subbed 2

Collins: One of those days when his effort didn’t cover his lack of mobility 3

Reid: Had a real tussle with Deeney. Needs to improve his use of the ball 4

Masuaku: Finally someone who had a decent game! Got forward very well and linked nicely with Lanzini 6

Noble: Now I thought Kouyate was worse but Bilic agreed with the majority round me and hooked the skipper 5

Antonio: Two more heaaded goals. Everything he did had purpose and commitment shame we didn’t have a few more on his wavelength 8

Lanzini: Great in the first-half, covered so much ground offering for the ball. Found spaces harder to come by as Watford dominated 7

Payet: Two assists – the second of which was world-class – disappointing thereafter 6

Zaza: First touch in a Hammers shirt was a spectacular overhead scissors through ball putting Antonio through in the first minute; was left to feed on scraps from there 5

Subs Calleri: Thrown on but had no chance to turn the game round 3 Fletcher: Ditto 3 Tore: One run which led to a corner, gets a point for that 1

39 comments on “How we rated the Irons”