How we rated the Irons at Spurs

Fabianski: Couldn’t be blamed for the three goals inside that dreadful first 15 minutes as the defence went AWOL – Two or three decent saves later and mostly boss in the box 6+

Coufal: Decent game defensively and  did well to set up that second goal with a great drive across goal which took a defelection 6 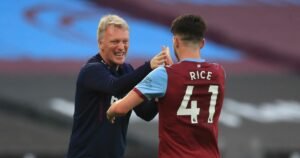 Balbuena: Like the rest of those at the back guilty of some sloppy stuff as Spurs ran riot but a fabulous headed  goal 6

Ogbonna: Very much out of sorts early on – grew into it a little later as the team improved framatically 6

Cresswell:Fine performance from the often maligned Cress and great cross for The General’s goal 7+

Rice: Excellent performance – ran his socks off, broke up dangerous stuff and got forward well when opportunity presented itself 8

Soucek: The usual seven or more for a bloke who has made so much difference to our midfield 7

Bowen: A totally committed 90 minutes – really puts in a shift front and back 7

Fornals: High energy performance – missed one outstanding opportunity but he leaves nothing on the pitch 6+

Antonio: Not his day at all – unsurprisingly  pretty anonymous 4

Lanzini: Scored the equaliser of a lifetime you will never see a better goal – all is forgiven Manu 7

Match verdict: Utterly extraordinary. We were pedestrian against a slick moving Spurs in the first half but far far better in the second and that final 10 minutes was about as awesome as it will ever get for a Hammers fan. The Lanzini equaliserer – a fantastically struck shot which beat the Spurs keeper at his top corner was totally out of this or any other world. Full credit to the manager for the substitution and at the end Moysie was a 57 year old going on 15 as he celebrated on the pitch. We are unlikely to see another game like this for a long while. COME ON YOU IRONS

7 comments on “How we rated the Irons at Spurs”