How we rated the Irons v Arsenal 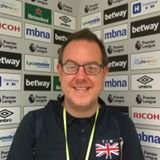 Hart: Didn’t spill one of ‘those’ shots with Ramsey hovering, made a superb fingertip save on 72 mins and even better on 78, yet still let in 4! Who’d be a goalkeeper… 7
Zabaleta: More right-back than wing-back today. Took his 9th yellow card prior to the opener 6
Ogbonna: Marshalled defence well until the 2nd went in 7
Rice: Well I don’t think we’ll ever see him duck under a cross like that again 5
Cresswell: Another who looked comfortable until things fell apart 6
Masuaku: Very sketchy in defence – moved off the post allowing the ball to pass him for first goal 4
Noble: Seems to be left to do an awful lot of running and harrying in this line-up, doesn’t shirk it 6
Kouyate: Huffed and puffed, looking a little weary 5
Joao Mario: Some nice touches early on. Very poor corners and faded 5
Fernandes: Bright start. Not best suited to wide right role 4
Arnautovic: Had the beating of Koscielny from the start. Has now scored 10 (ten) goals!!! 7

Subs
Lanzini: Instinctive pass to Marko, needed in the starting 11 quickly 6
Hernandez: Immediately found himself unmarked from a free kick. Had few glimmers after that 4
Carroll: On too late for any heroics or to leave any imprints on the Arsenal defence 3

2 comments on “How we rated the Irons v Arsenal”