How we rated the Irons v Man City 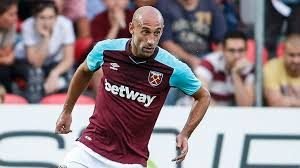 Adrian: Couldn’t be blamed for a couple of goals, and made some great saves. There was some poor distribution however, and there’s no question we need a top drawer operator between the sticks 6

Rice: Another game to forget. Bad luck with an own goal incident, Adrian’s touch on cross leaving him helpless but that was followed by a couple of really bad mistakes. Tried really hard, but it wasn’t enough today. 4
Ogbonna: Even keeping in mind, that ManCity’s frontline is a nightmare for any defender in the world it wasn’t Oggy’s best performance today. 5
Cresswell: Scored a wonderful free-kick, but lost almost all duels vs Sterling. Most of the danger came from his flank. 4.5
Zabaleta: Didn’t look as shaky and nervous as the rest of our defence. Saved us on a couple of occasions and didn’t give up like most of the players. 6
Kouyate: Pretty anonymous . Looked lost. 4
Noble: Tried to play tough guy from the start, deserves an assist for Cresswells goal (for moving the wall). But was too slow and uninventive most of the time. Cant fault his attitude though. 5
Evra: Couldn’t be blamed for an own goal,  but didn’t cover himself in glory today. 4
Fernandes: You have to wonder why our manager made him an automatic starter. Produced one good run, which led to Cresswell goal, but wasn’t involved much in the game afterwards. 4
Lanzini: Had a few good touches in the first half, but faded in the second and made a terrible mistake, followed by City’s goal. 5
Arnautovic: Singlehandedly created an opportunity and scored a wonderful goal, which was mistakenly disallowed. Played a lone striker most of the time with absolutely no service. Tracked back till the very end. Gave his boots to a young fan. Pure class. 7
SUBS:
Hernandez: I know your thought are elsewhere but you’re still getting big salary here, maybe at least try to run instead of walking? 3
Mario: Little better than Hernandez , no impact whatsoever 4
Masuaku: Few runs and poor crosses 4
Permalink

← Ultra defensive Hammers torn to pieces – thanks DM
Another home thrashing – the fans speak out! →
Click Here for Comments >

3 comments on “How we rated the Irons v Man City”