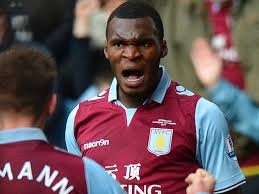 Aston Villa striker Christian Benteke’s absence from the clash with the Hammers at the weekend is a huge plus for the Irons.

ClaretandHugh’s top analyst Leroy Rosenior reckons the big fella was coming back to his best against Spurs at the weekend and that his sending off and resulting suspension for the Boleyn match is “fantastic” news.

He said: Benteke is their focal point – a mega presence and not having him to worry about him makes – or should make – life considerably easier for us.

Benteke raised his hand to Ryan Mason’s face after being shoved by the Spurs player during the match at Villa Park on Sunday.
Mason escaped disciplinary action but looked a major offender and should perhaps have joined the striker but regardless of that it was all good news for the Irons as Benteke walked.
Rosenior said: “There are no excuses for Benteke’s  but I think Mason should have gone as well. However, there’s no question the striker’s absence should make life easier for us.”
Permalink