“I am stunned by the West Ham fans” 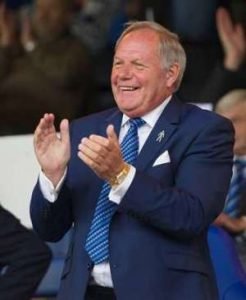 Barry Fry is a football man to his backbone – he bleeds for the game and has seen virtually everything it can offer.

And this afternoon the former Birmingham City boss – admits he has a very special feel for the Hammers took himself along to the London Stadium as a guest of the board to absorb the current climate at the climate.

His club Peterborough and the Irons have a special relationship with our young prospects moving to the club on loan and with pre-season friendlies often being organised.

And speaking to CandH after today’s game he said: “I came away – as I always do – stunned by your fans. There are none better in the country. The place was absolutely buzzing and it was thrilling to be among them.

“The team gave them 45 minutes of pure football and they responded brilliantly because these people are intelligent and know the game through and through.”

Fry – having worked for David Gold and David Sullivan – has always been close to Gold in particular but explained that he won’t take sides in the issues that have divided the club order the past few months.

He said: “I have always loved West Ham and have been to the stadium eight times and never seen them lose but today for that first 45 minutes they were superb – better than I’ve ever seen them.

“I do not believe they will go down and I reckon in Declan Rice they have one of the finest young prospects in the country – he is cultured and reminds me so much of the young Bobby Moore.

He’s at ease on either side and has nailed a place in the side for the forseeable future – a great young player who has a tremendous career ahead of him.

“I have never believed the club will go down – with fans like that behind them and a summer ahead to sort out their issues I expect the club to really move on.”

One comment on ““I am stunned by the West Ham fans””