If this is the Irons starting XI my eyes are watering

Slowly things are becoming clearer although trying to pick a Hammers first team from so many options is a bit like trying to find the proverbial old needle in a haystack.

It’s not made any easier by the latest word that Senor Pellegrini still wants – and is pressing for a midfielder – and a striker. 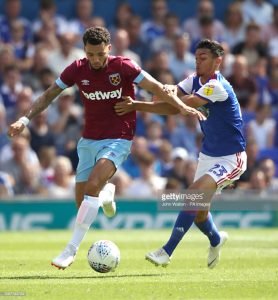 Should he get them this will probably be the most formidable Hammers squad we have seen in many years and fair play to him – he’s doing what all managers should do: Push the board to dig deeper and deeper.

On the other side of the coin, in personally guaranteeing a new £50m overdraft and spending up to it, the board have gone beyond anything they have done before and faced up to their most vehement critics.

For the purposes of this piece we can only work on the current personnel and the omission of such as Edi Fernandes, Sam Byram and Reece Oxford from the Austrian squad  make things only marginally easier when deciding who will get the shout for the opening game at Liverpool.

My team will obviously prove controversial to some but after a lot of thought this is what I’ve come up with and it just proves that when the boss said early on he was building a squad rather than a team never a truer word was spoken:

Adrian: Has done nothing wrong is the recognised No 1 and I reckon he will start.

Fredericks: An out and out Pellegrini type – loves to get forward but knows how to defend.

Diop: Has been under little pressure but I think he looks composed and at £21 million is unlikely to be overlooked.

Ogbonna: Still worries at times but by a large a decent pre-season.

Cresswell: Hoping he is fit because we need his defensive qualities whilst hoping he will recover that sparkling  forward going form under the new boss.

Noble: Has had an impressive pre-season and nailed on to start.

Wilshere: Not great against Ipswich but clearly quality and creative brilliance at best.

Rice: Looked terrific in the midfield role at Ipswich – my fingers are seriously crossed for the lad.

Yarmolenko: Looks a top signing, big, clever and really hard to push off the ball.

Anderson: Exciting even at half pace – what a star he’s set to become for us.

Arnie: None of my words necessary.

If we’ve had a stronger squad I haven’t seen it in a lot of years!