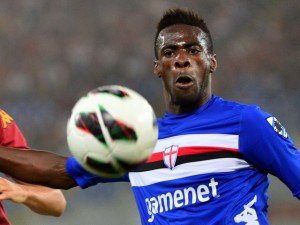 Reports gathering pace again today claim that Pedro Obiang is nearing a move to West Ham to become the second summer signing of the season. Two tabloids claim that West Ham have lodged a fresh £5.75M (8 million Euro) bid  with Sampdoria increasing a  previous bid of 7.5 million Euros they made earlier this month.

In early May Sport Italia journalist Alfredo Pedulla said the Hammers had reached an agreement in principle with Sampdoria for the transfer Pedro Obiang for a fee at 7.5 million Euros (£5.4m) but late interest from Spurs and Stoke City encouraged Sampdoria to slap another one million Euros on his asking price. If the latest reports are to be believed the two parties have met half way on the transfer fee.

The Spanish midfielder has made 60 appearances for Sampdoria since 2010 scoring just one goal.  Obiang was capped for Spain at youth levels and is seen  as an ideal replacement for Alex Song.