Injury crisis may give youngster a chance 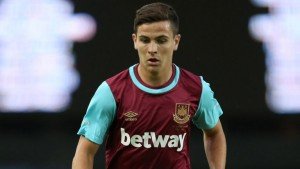 With injuries continuing to bite into the Hammers squad Josh Cullen’s chances of making a first team appearance soon are on the rise.

Season-ending injuries to Winston Reid and Sam Byram COULD see Cheik Kouyate pulled into the back four possibly opening the way for Cullen in midfield.

And speaking to the official site Cullen said: “Obviously being out on loan at Bolton for the first half of the season was more valuable experience for me, playing in the Championship and getting some more games under my belt and developing as a player for a further six months.

“There was a change in manager, so I was keen to come back here and show the new manager what I was all about and try and impress him, so I came back and played in a few games and have been back in the mix. Hopefully I’ve done enough to show him I have a future at the club.

“I did enough to warrant staying on for the rest of the season, which I’m doing now, and hopefully I can push on again and try to push from being on the bench and in the squad to being in the team and getting some appearances before the end of the season.”

“As a young player, you have to take every day training with those players as experience. People say about getting experience by going out on loan, but coming back and training with the quality of players we have got at this Club is an experience in itself and one which should help develop me as a player.

“Going up against those players is a great challenge for me and hopefully I can push them and create some healthy competition, and that they know I’m here and pushing for a first team spot. It will also push me on as I know I have to be even better to get into the team, so it’s good to have that competition around.

“I’ve just got to stay patient, keep doing what I am doing in training, keep working and when the manager calls upon me, make sure I’m ready, I do myself justice when I go out there and do as well as I know I can.”

3 comments on “Injury crisis may give youngster a chance”