Posted by Sean Whetstone on January 21, 2018 in News, Whispers 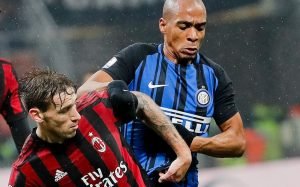 The website says the discussions have been going on for days and were originally stopped by the player himself who was not entirely convinced by moving to the London Stadium to play for the Hammers. He subsequently agreed to let the discussions continue which allowed the clubs to agree on a loan which would cost West Ham €1.5 million with an option to make the transfer permanent.

The report says the negotiations have hit a new stumbling block, with the West Ham board feeling very reluctant to invest €1.5 million on a loan for a player that seemed very reluctant to joining them in the first place. The loan is imperative for Inter Milan who need to offload the Portuguese international in order to be able to sign another player after having secured Rafinha from Barcelona earlier today.