Irons boost as Hazard hobbles off 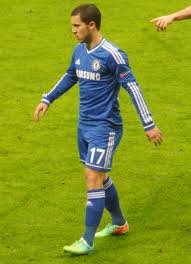 News that Eden Hazard hobbled off at the very end of the Chelsea victory over Stoke City last night won’t have upset any in the Hammers camp this morning.

The player is reported to have suffered an Achilles problem and there is now a doubt over his involvement in the Boxing Day clash with the Irons.

The player was caught by Stoke’s Phil Bardsley and will be checked over the next couple of days before any decision is made on his involvement on the 26th.

Jose Mourinho failed to mention the Irons game specifically after the game saying only of the festive programme: It’s very difficult. I have lots of respect for the players in this country. The moment they plaAdd Mediay in this country I respect them a lot.

‘At this moment the German guys are on the beach, the Spanish guys are in the Maldives getting sun, and in this country you play this day, Boxing Day, the 28th. There is no Christmas, just football. And the supporters give their respect because every match is sold out.’

A Hammers source said: “They have great players everywhere but we go looking for a result. It will be a difficult game with or without Hazard’s presence in the team.”