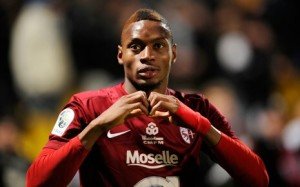 etz striker Diafra Sakho is still some way from becoming a Hammer despite widespread reports tonight that he’s on his way to the club.

Both the Mirror and Mail have claimed tonight the player is close to signing for the club from the French second division outfit.

But within the last few minutes Claretandhugh has learned that whilst there’s an agreement in place with the club, the player’s terms are proving difficult to agree.

A source told us: “It’s true we are talking but at this stage we can’t agree a deal with the player at the moment and he’d be a big gamble.”

The 24 year old has a decent goals record over the last few years but the Hammers are aware that it’s a big step up from where he is now to the Premier League even if it as a cover striker.

“The source said: “We’ll keep talking but at this moment there’s not a deal in prospect. However, that can change quite quickly.”