Irons close in as Bowen talks go on

Posted by Dave Langton on January 31, 2020 in News, Whispers

West Ham continue to negotiate a deal for Jarrod Bowen from Hull City.

Club insiders have confirmed that the two clubs are in negotiations but that the deal is yet to be finalised. 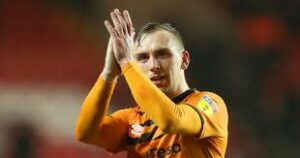 C&H understands that the deal is worth an initial £14m plus a potential £8m in add-ons, taking the total fee to £22m.

A medical has been planned for later today (Friday) but there are still details to be ironed out as the Hammers continue their talks with the Championship club.

Bowen has also been linked with Crystal Palace but sources have said that there is a confidence at West Ham that the deal can be done prior to the transfer deadline.

He has scored 17 goals in all competitions this season and is highly-regarded in the corridors of power at the London Stadium.

He will become the club’s third addition of the transfer window if he arrives, following the signings of Darren Randolph and Tomas Soucek.