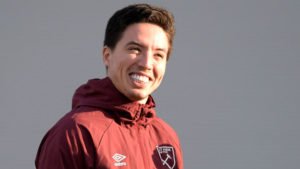 Samir Nasri’s hopes of landing a second contract with the Hammers at the end of the season appear to be fading with every successive game.

The midfielder has been absent since appearing as a second half sub against Huddersfield and is likely to be missing again this weekend for the match at Spurs.

Although he is a big favourite of manager Manuel Pellegrini, the chance of him being handed the £80k a week deal he is after for a second year looks a non starter at the moment.

We were told this morning by a senior insider on e mail that he is once again a big doubt for the game against Spurs which leaves him just three more games to stake a realistic claim for a second contract.

However, the reality is that such a development  now looks very doubtful indeed and he probably hasn’t enough time to convince the manager anyway and a dip into the transfer or loan market for a replacement is more likely this summer.