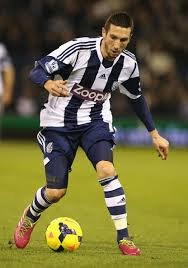 West Ham are set to drop their interest in Marseilles midfielder Morgan Amalfitano as they go in pursuit of a central defender.

Amalfitano has been on the Irons radar for some time although the club  has worried about given the player’s inconsistent season on loan at West Brom last term.

The 29 year old has been reportedly desperate for a move to Upton Park after an alleged training ground row with coach Marcelo Bielsa this weekend.

Sources in France insist the he is desperate for a move back to the Premier League at the Boleyn but ClaretandHugh has learned the club has all but brought its interest to an end.

A source told us: “With the injury to James Tomkins, and James Collins suspended, we need a defender, probably on loan, desperately and that’s where our efforts are concentrated.

“We are also looking at other areas of the team we need to strengthen and in Ravel Morrison we have a player of the Amalfitano type.”

2 comments on “Irons decision on Amalfitano”