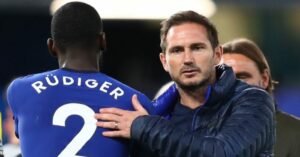 West Ham will be doing their best to help former star Frank Lampard to the worst season in Everton history since 1950/51.

The Merseysiders have been members of the top league since that campaign 71 years and have only been relegated once before that – back in the days of the legendary Dixie Dean in 1929/30.

It’s an extraordinary record but one that could again come to an end this season with The Toffees hovering just above the three bottom places in 17th position.

No team in the top division has conceded more goals than Everton this season – a staggering 28  shipped in just 13 matches.

However, they may remain outsiders for the drop having games in hand on clubs around them although that is far from cut and dried with some tough fixtures coming up which include relegation rivals Burnley after us.

The Hammers will be determined to put it across an Everton team as they try to avoid  a disastrous Premier League exit under the former Hammer.