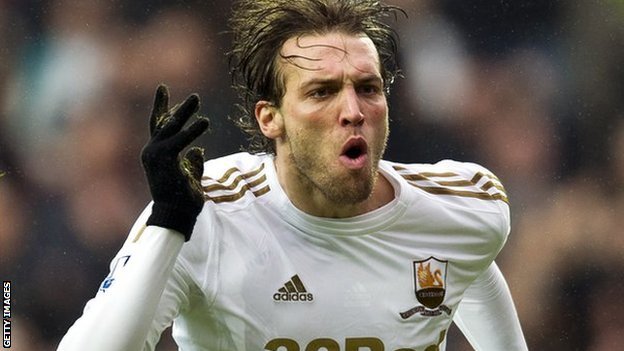 West Ham will take their time deciding whether Swansea striker Michu has a future at Upton Park.
The Spanish striker has been strongly linked with the Irons in recent days at around £3 million but ClaretandHugh understands that Swansea are making most of the running in talks.
The Hammers are very aware of the player’s injury record which saw him make just 15 Premier league appearances just two goals last season although he managed four in Europa League action.
He had built his reputation on the previous season when finding the net 22 times in 43 appearances but suffered a series of knee and ankle problems last term.
Swansea chairman Huw Jenkins and Hammers co owner David Sullivan have had talks but ClaretandHugh’s understanding is that a deal is not in sight at this stage.
A Hammers source told us exclusively: “The player has had plenty of problems. Things can change of course but it’s not looking likely at this stage.”
Even the leading Swans blog www.theswanseaway.co.uk   has all but written a deal off in a highly informative piece.
They say: ” West Ham are reported to be interested but given how much he struggled with injury last season it’d be remarkable, in my opinion, if anyone makes a move for him this summer.
“That means he’s almost definitely going to be a Swansea City player next season, and the question still remains as to how to get the most from the languid, sometimes frustrating Spaniard.”
Permalink