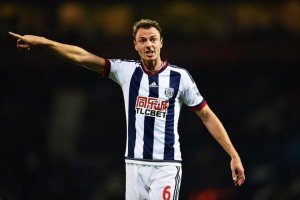 West Ham boss David Moyes is set to go head to head with Sam Allarcyce in the battle to grab West Brom’s Jonny Evans this summer.

The Mirror’s Darren Lewis has today confirmed the ClaretandHugh story of several days ago that Moyes is an enthusiastic admirer of the former Manchester United central defender.

CandH learned a week ago that the 30 year old was high on Moyes wanted list but it seems Everton boss Allardyce is also keen.

And the Hammers can also expect Leicester City to show their hand as the battle for the player hots up in the months ahead.

Arsenal and Manchester City were both keen on Northern Ireland international last month but City opted instead for the potential of Aymeric Laporte, 23, from Athletic Bilbao while Arsene Wenger refused to meet West Brom’s valuation.