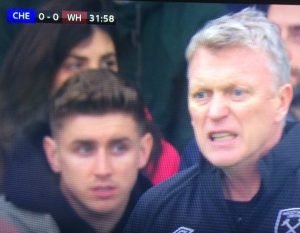 Newcastle and Leicester City are ready to join the Irons in a summer chase for Fulham midfielder Tom Cairney who has been on David Moyes wanted list for months.

Cairney’s appearance at the Chelsea v Hammers match – sitting behind the Hammers boss – has caused a round of fresh speculation that he is very much on his way to the  London Stadium this summer.

But both the Magpies and Foxes are determined not to give the Irons a free run at a player rated one of the best midfielders outside of the Championship.

The fact that he was at the match between Fulham’s neighbours and the Irons was no big surprise but that he should be sitting so close to Moyes may be!

Cairney is rated one of the best midfielders outside of the Premier League and the Hammers were quoted a reported price of £25 million by the promotion hopeful club in the winter.

However, if they fail to make it into the big league the Cottagers – who last night beat Reading 1-0 to go into the second automatic promotion spot ahead of Cardiff City – may find theur hands forced to sell.

However, should they go up Cairney has a contract until 2021 and with other clubs interested, a keen  – and probably ultimately unsuccessful bidding war – would be underway.