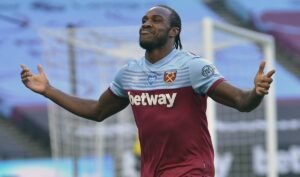 West Ham will be hoping something close to the reported £15 million  are ready to pay for Danny Ings should they sell Michail Antonio this month.

A report in the Mail claims the club are ready to let the 32 year old leave given his slump in form.

But with 18 months left on his deal plus a 12 month option the No 9 won’t be going on the cheap.

Wolves are keen but according to the Mail there are other Premier League outfits interested in the  player.

That could very easily push the price up and may even give the Hammers a chance of collecting £10 million for a player who himself doesn’t seem adverse to the possibility of leaving the London Stadium.

He has spoken in the past of wanting more playing time and is unlikely to be averse to the prospect of picking up a signing on fee at a late stage of his career.