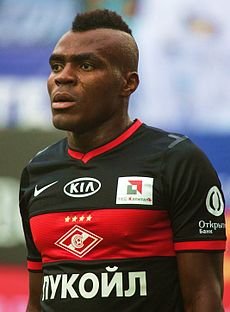 West Ham negotiators are still battling to put a deal to a loan deal together for Nigerian striker Emmanuel Emenike.

The club has been trying to get a deal sorted out all week but admitted to ClaretandHugh this evening they are hitting some snags with his club Fenerbache.

The player is currently on loan at Al Ain and the Hammers need to work out a deal with the Turkish outfit for the rest of the season.

However, a source admitted to us this evening: “We are unable to get any answers from his club but we will keep trying to make it happen.”

Emineke has a controversial background as detailed in a story on this site under the headline ‘Emeneke’s controversial baggage’ but the club are unfazed by his previous problems.

We were told that if they could get the loan done they would and then see how things go before triggering any permanent arrangement at the end of the season should they be in a position to do so.