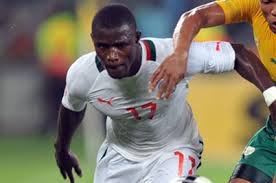 West Ham are this morning being linked with moves for a “hardman” central defender as the January transfer window approaches.

Senegal’s Stephane Badji could continue the country’s ‘invasion’ of the Boleyn according to The Sun who report he is ready to be snapped up at around £1.2 million.

Badjo – like Diafra Sakho and Cheik Kouyate is set to play in the African Nations Cup and the player is apparently seen as a signing who would be very usefl should Alex Song move on at the end of the season.

Badji plays for Brann Bergen in Norway and fits the Irons age profile at 24. He is believed to be keen to get his future sorted out before leaving for Africa.

← Merry Christmas from fourth place!
DG: “Downing is priceless to us” →
Click Here for Comments >