Irons may get late offer for midfielder 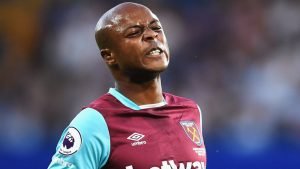 West Ham are still waiting for a firm bid  from Swansea for Andre Ayew after making it clear that thus far there has only been a loan offer for the Hammers misfit.

Report this morning claim that the struggling Swans are ready to launch an £18 million bid for their former player having offered £15 million so far.

The reality is, however, there is no bid on the table although with clear interest in taking him Swansea obviously hold an interest and it t COULD be assumed a deal might happen if the Hammers can find a replacement given their seriously depleted squad.

In the meantime injury claims are surrounding the player and it will be interesting to see how quickly they clear up following the closure of the window whether he is at the London Stadium or back in Walhoales.

Meanwhile, ClaretandHugh has learned that the Irons are ready to go to £20 million for Fulham midfielder Tom Cairney although the Championship club are believed to want £40 million – more than what was being asked for William Carvalho in the summer!

5 comments on “Irons may get late offer for midfielder”