Irons put Tigers to the sword 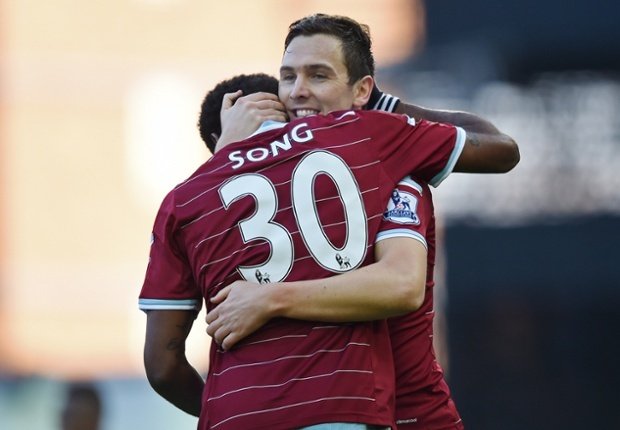 The Irons returned to winning ways after five attempts – six if you include the Everton replay draw before penalties – thanks to a great second half display.

Goals from Andy Carroll, substitute Morgan Amalfiltano and Stewart Downing got things back on the straight and narrow after a poor  first 45 minutes.

Andy Carroll put us in front  with a 49th minute strike from five yards after Hull keeper Allan McGregor failed to hold onto an Enner Valencia rocket shot.

Amalfitano made things safe five minutes after appearing as a sub for Mark Noble, latching onto Valencia’s clever pass to score his third goal of the season from close in.

And three minutes later, a fabulous ball out of defence from Alex Song found Downing just over the half way line and the crowd favourite raced the length of the Hull half to score.

Nolan almost made it four when hitting the crossbar from a near impossible angle after reaching a Downing ball forward.

The side had been as good after the break as they had been poor before it with Downing picking up the man of the match award.

He had been at the heart of all the good things they produced although Amalitano was deeply impressive during his 25 minutes of action.

His drive and creativity made an immediate difference to a previously leaden footed midfield which had struggled badly in the first half.

They had resorted by and large to aerial balls forward aimed towards  Andy Carroll as the visitors dominated.

City could easily have gone ahead through Sone Aluku inside the first couple of minutes as the striker twice went past Tomkins with ease before some desperate defending cleared the danger.

Ahmed Elmohamady had a simple chance in the sixth minute but fired wide of a gaping goal when allowed acres of space by the Hammers highly uncertain defence.

Tomkins was having a nightmare but the pressure was relieved momentarily when Cresswell fired over from a tapped Noble free kick.

And Andy Carroll whipped in a fine left footed cross which saw Curtis Davies turn away the danger as Valencia moved in. Tomkins headed over from the corner.

City though were first to everything and Aluku’s runs caused huge alarms every time he moved forward and colins was left to clear up as he arrived in the box having left Tomimks for dead.

The Hammers pressed more towards the interval but there were no serious opportunities created,although keeper Allan McGregor had to get down quickly to cling onto a Tomkins header from Downing’s cross.

But the second period saw the team back to their best as they kept the ball on the deck and produced the type of football we had become used to at the start of the season when Sakho and Valencia were the front pairing.

← Ear ear! Sam brings it up AGAIN
Allardyce: “Let’s do a Southampton” →
Click Here for Comments >

3 comments on “Irons put Tigers to the sword”