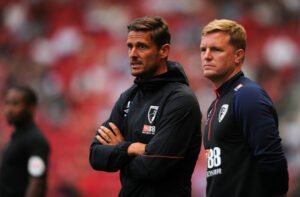 West Ham fans watching tonight’s just finished  0-0 draw between Bournemouth and Spurs would have felt their blood pressure rise to the limits in the last minute.

Callum Wilson appeared to have scored  a last minute winner with a decent strike until VAR ruled the ball had been handled on its way into the net.

Spurs had every reason to feel relieved because they had probably been second best throughout as Eddie Howe’s team finally stepped up to the plate.

They had two or three decent chances but in the end had to settle for a point which sees them three points behind the Hammers with an inferior goal difference.

The disallowed goal could see them pay a heavy price as they now meet leicester City on Sunday before travelling to Manchester City.

Next up tonight it’s Villa who kick off against Manchester United at Villa Park are four points behind us and again with an inferior goal difference.