Posted by Dave Langton on December 14, 2022 in News, Whispers

Luizao has arrived in England ahead of completing his move to West Ham, according to a new report from 90min.

The Hammers appear to have struck a deal to sign the defender from the Brazilian club. 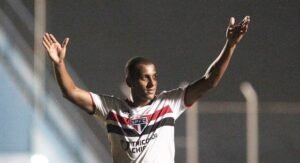 The Irons have beaten off heavy competition to secure Luizao’s signature, with Benfica, Sporting Lisbon, Wolves, Fulham, and Juventus all beaten to the punch.

He has reportedly now arrived in England and is set to undergo a medical ahead of completing his move to the London Stadium.

The 20-year-old is set to sign a three-and-a-half year deal at West Ham and will join once his contract at the Brazilian side expires, which comes at the end of January.

90min also reports that there is interest in another Sao Paulo player, by the name of Pablo Maia.

He is another 20-year-old at the Brazilian club and the two sides are said to be locked in talks over the structure of a deal.