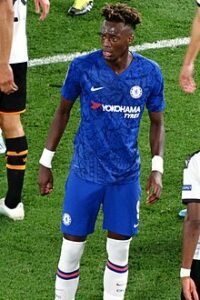 West Ham will have rivals in Southampton for Chelsea’s Tammy Abraham this summer.

The Hammers are determined to find a striker besides doing their utmost to bring in Jesse Lingard but the south coast side are also keen.

There’s a snag in that the Chelsea’s £80k a week wages could cause a little dressing room unrest but the Hammers will push on with their plans should Chelsea decide to sell.

It’s being reported the player has no intention of signing a new deal with the south west London outfit beyond 2023.

And according to The Athletic he won’t come cheap should Stamford Bridge boss Thomas Tuchel decide to cash in  on him in the summer to try and get the best fee possible, rather than see his value drop as his contract runs down.

And we understand that both ourselves and Saints have made preliminary inquiries about the players availability.

With  Olivier Giroud, Timo Werner, and Kai Havertz as attacking options it seems reasonable to assume that the Blues may be ready to do a deal.

← Bill Gardner: The Man, The Myth, The Legend
‘Psycho:’ “Jesse has fitted straight in with the boys” →
Click Here for Comments >