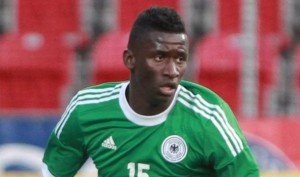 The Hammers though are determined to do everything they possibly can to hold on to Winston Reid despite there being no change in the situation on new contract talks.

The Hammers are also watching – as reported by Claret and Hugh – Brighton’s highly promising  Lewis Dunk but would love to land the 21 year old German international if the Reid if talks go the wrong way.

We were told by a highly placed Boleyn source: “Rudiger has always been on our list and we are continuing to watch the player but there are several others such as Dunk.

“Winston’s situation is not about money. He sees this as a very important contract and is looking at the prospect of European football.

We want him to stay and will continue to negotiate but of course he can do as he chooses next summer if we have no agreement.”

Twenty-one year old  Rudiger is seen as one of the brightest young talents in German football and has already earned senior international recognition – making his debut for the newly-crowned world champions in May.

He has been part of the first-team set-up at Stuttgart for three years now and figured 30 times for them in Bundesliga competition last season.