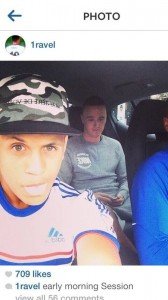 West Ham tonight brushed off suggestions that Ravel Morrison was guilty of any serious misdemeanor after posting a picture of himself on Instagram apparently in a Chelsea leisure top.

The pictures didn’t take long to appear on Twitter and caused a mini furore among his followers.

Some claimed it wasn’t a Chelsea top whilst others claimed he should leave the club now after recalling Paul Ince’s decision to be pictured in a manchester United short whilst still a Hammer in the late 80s..

However, “given Ravel’s track record,” sources inside the club remained entirely relaxed about the incident.

Once well placed source told ClaretandHugh: “We’ve seen the pictures, nothing is really a surprise as far as Ravel is concerned – he’s just a young boy really.”