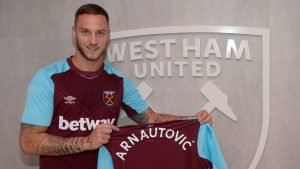 The 28-year-old, joins Joe Hart and Argentina full-back Pablo Zabaleta having signed a five year deal with the Irons.

After making 62 caps for his country. ‘Arnie’ declared: “It feels special to me to be a West Ham player. Everyone knows that West Ham is a big Club, with big history and I’m happy to be a part of it now. I can’t wait to get started.

“I played against West Ham at the old stadium – I didn’t play last year at the new stadium because I was suspended – but I came to the game and I can only say it is a massive club with a lot of fans.

“They are crazy for football and this is what I like. The club is still growing, getting better and better and that’s why I’m here.”

“Alongside Pablo Zabaleta and Joe Hart we have brought in three players with vast Premier League experience this summer, and that was one of our key targets as we look ahead to the new season.

“Marko will bring plenty of quality to our front line and I’m excited to see him in a claret and blue shirt.”