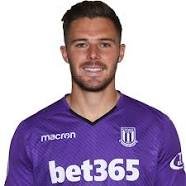 Stoke goalkeeper Jack Butland leads the pack of who West Ham supporters who like to join West Ham this summer between the sticks.

With over 1,700 voting in yesterday’s Claret and Hugh poll, over 50% would want Butland to pull on a Hammers jersey.  The 25-year-old has been linked to West Ham recently and it has been reported that the Hammers made a tentative enquiry but Stoke won’t entertain bid under £30m and that valuation but may be a step too far for the Irons.

Burnley’s shot-stopper Tom Heaton was the second most voted target with over 24% of the vote followed Manchester United’s Sam Johnstone at 6%. Edouard Mendy and Lukasz Fabianski pulled in 5% of the vote each while Willy Caballero had 4% and Liverpool’s Simon Mignolet the least 3%.

← We dare to hope after so many false dawns
Poll: Which centre back would you sign for West Ham? →
Click Here for Comments >