Posted by Sean Whetstone on December 31, 2015 in News, Whispers 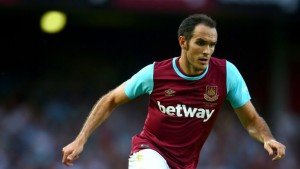 Joey O’Brien is unlikely to leave West Ham this January transfer window because of continuing injury problems but he will be gone  in June next year when his contract expires ClaretandHugh understand.

There was speculation he could have been released early this winter with his old club Bolton rumoured as a possible destination for him but his injury situation makes any move in the last six months of contract extremely unlikely we have been told.

Claret and Hugh’s most senior source told us this morning “Sadly Joey is injured, who takes an injured player? He’s on a quite high wage”

In 2011  O’Brien was released by Bolton and was snapped up by West Ham on a free transfer after getting a trial with the Hammers. He penned an initial two year contract under Allardyce. In January 2013 O’Brien signed a new contract with West Ham which will end in the June 2016. He believed to be on around £20,000 per week contract.

The 29 year old right back has been 105 appearances in all competitions for the Hammers scoring three goals. West Ham are already scouting for a new right back in the summer as Carl Jenkinson is likely to leave too at the end of his loan.

← Bilic: “Sakho will be back in early February”
Collins deal: The finances →
Click Here for Comments >