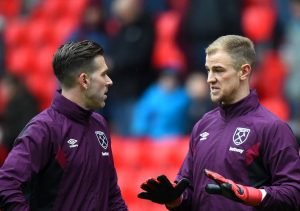 Joe Hart could be playing for La Liga in Spain next season as reports emerge he is wanted by Sevilla FC.  Spanish website www.elgoldigital.com claims Hart is a target for the Spanish club.

As reported earlier this month Real Betis are reported to in contact with their former goalkeeper Adrian. LaLiga club Betis are looking to revamp their goalkeeping options and have a deal in place with Espanyol’s Pau Lopez.

Lopez is contracted with Espanyol until the end in June but has signed a pre-contract with Real Betis which will keep him there until 2023. The 23-year-old will have a buy-out clause of 30 million euros added to the goalkeeper’s contact.

Spanish newspaper AS says they’re also in contact with Adrian about a return to Spain this summer to act as a mentor and competition to the younger keeper. The 31-year-old has just over a year to run on his current deal, but West Ham might not stand in his way if an offer came in.