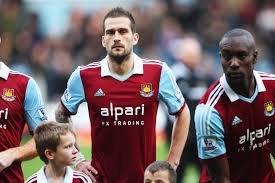 Roger Johnson counts beating Arsenal as a career highlight and is looking for more of the same on Tuesday whether he’s playing or not!

The centre back was part of the Birmingham City side which defeated the Gunners in the 2011 Carling Cup final before he went on to taste success at Wembley at the second attempt, following an FA Cup final defeat for Cardiff against Portsmouth in 2008.

Now he sees Arsenal as beatable and reckons the Irons can cause a big surprise.

He told www.whufc.com “Arsenal have been a bit hit and miss this season  – they’ve had some good wins and some sloppy losses.

“I do think they’re very beatable, as we saw the other day against Everton. The cup final was a brilliant day and one I’ll never forget.

“I thought we deserved the result on the day. They had Samir Nasri, Robin van Persie and the like, they had a great side out.

“We had a great run and we went into the final with the approach that it was about what happened on the day. Every game is on the day, so there’s no reason why West Ham can’t go to the Emirates and get a result on Tuesday too.

Johnson was worked his way back into the Hammers’ squad in recent weeks, coming off the bench in the victories over Hull City and Sunderland.

He added: “I came here wanting to play as many games as I possibly could. Just being amongst it is what I came here for, and I’ve loved every minute of it.

“If I can get a few more games in between now and the end of the season and try to stick in the manager’s head for something next season that would be great.”