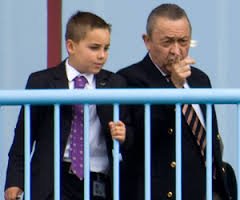 Joking Jack Sullivan last night sent @whufc_official a ‘get on with it it’ message ahead of the news being broken that Aaron Cresswell had signed a big new Irons deal.

The news that a major announcement was on the way had been put out and the news was eventually broken a few hours later.

The chairman’s son, however, was clearly anxious for the news to become public and in a message followed by two laughing smileys he declared: “Hurry up @whufc_official or I will tell them the major news.”

Young Jack – who now has his own column on the club’s official website – has also revealed that marquee signing Dimitri Payet can play no part in the games against Lusitans in the upcoming Europa Cup qualifiers.

Explaining the situation, he said: “Payet cannot take part in this first around! But maybe the other 2” and he added that only 2,700 tick