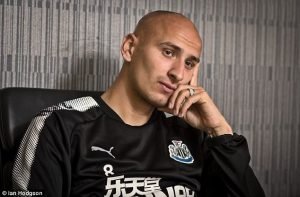 Jonjo Shelvey has remained coy when asked whether he ever considered joining the club he supported as a boy.

Last summer the Newcastle player was linked with a move to the Hammers.

“I didn’t really have an opinion on it,” he said, speaking in an interview with Sky Sports.

“I was under contract at Newcastle and it was just a matter of what would be would be. If they wanted to move me on or sell me, then that was their choice. But I was more than happy to stay. I never once thought about leaving

“Obviously, I grew up as a West Ham fan and I’ve got a place back home right next to their training ground. It would have been an easier choice, in that sense, but I’ve always been away from home. It’s sort of become the norm. You just get used to it. Now, even when I get time off, I tend not to go back. I just stay up here and enjoy it. It’s a lovely place to live.”