Jordan gets his Hammers knife out again 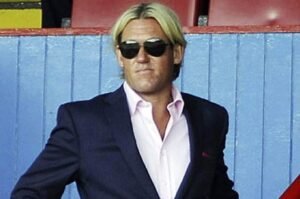 Simon Jordan – give it a rest mate

Simon Jordan has made some annoying outbursts about the Hammers over the years in his job as a Talksport pundit, but none more so than today (Mon).

There seems no rhyme or reason for it but he appeals to enjoy sticking a knife into the Hammers whenever the opportunity presents itself and indeed when it doesn’t as is the case today.

For reasons which may or may not be true – he always has a 50 per cent of being right – he reckons the Hammers will be selling Declan before he makes 200 appearances for the club, having made his 150th yesterday against Palace.

Quite why he would want to make such a prediction when there are a multitude of current issues which could be discussed is strange.

But that seems to be the way with the former Palace owner and perhaps he was irritated by the defeat sufficiently to have a pop at the Irons as a result.

Commenting he said: “He won’t make 200 appearances for West Ham

“That’s not because West Ham aren’t a fertile ground for him to play good football at, it’s because someone will make a compelling offer to West Ham.

“Irrespective of Czech Republic huge investment into that club, they will sell him, and it probably will be north of £100million.”

Claret and Hugh says: Jordan, having agreed a 25-year lease for Selhurst Park – Selhurst Park Limited,- later saw the company go  into administration. So what may be a compelling offer in his world most certainly wouldn’t be in one involving Daniel Kretinsky who we can’t see being ready to sell off the best player at the club before doing everything possible to see Declan stay with an historic contract in his pocket. But then Jordan has a history of getting things wrong which is why he probably finds his only involvement in the game is as a pundit.

4 comments on “Jordan gets his Hammers knife out again”