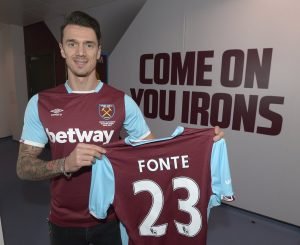 Jose Fonte has officially departed West Ham after agreeing his move to China. The Portuguese international signed a contract with Dalian Yifang this morning and the news will be officially announced by both clubs this afternoon.

The deal is said to be worth £4.3 million to West Ham with 34-year-old likely to earn up to £120,000 a week after tax.  Fonte has signed a two-year contract with the Chinese Super League club.

Fonte has not played for West Ham since October because of an ankle injury and in the interim was angered by David Sullivan, the West Ham joint chairman, saying that his children had begged him not to sign the defender. He had 17 months left on his £70,000-a-week West Ham contract originally costing the Hammers £8.3m under Slaven Bilic.