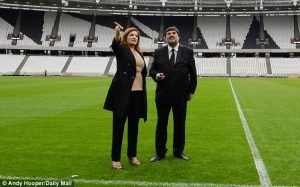 Daily Mail Journalist Martin Samuel has questioned the action group’s name asking whether it suggests you are not a real West Ham fan if you don’t march next month.

Samuel wrote in the Daily Mail: “On March 10, before a home fixture against Burnley, there will be a rally against the current owners of West Ham. That’s the supporters’ prerogative. Fans have the right to protest and it is not as if West Ham’s fortunes since moving to the London Stadium have greatly vindicated the move.

They have sold their best players, lost a popular manager, fought relegation and frequently struggled at their new home. The fans think they were mis-sold a dream and are unhappy. There has not been the great leap forward promised. It is up to the club to demonstrate otherwise.

The problem is the name of this protest movement. The Real West Ham Fans Action Group. Why real? Whose call was that? Why are these fans any realer than those who won’t go on the march? Why is opposing the move to the London Stadium a more genuine stance than seeing its benefits?

The Action Group wants a board member to answer protestors at the rally. ‘This is our open invite for you to come and tell the fans the truth,’ said a spokesman. Again, that presumption.

Maybe the truth is already out there. That the opportunity to move, on the cheap, to a much bigger stadium in the locality was too great to turn down. That there was genuine fear West Ham would shrink in relevance and potential if they remained at Upton Park. That in getting such a good deal, they actually ceded too much control, making the stadium less appealing. And that, on the field, mistakes have been made — particularly in the transfer market.