Just one question left: WHEN will the axe fall? 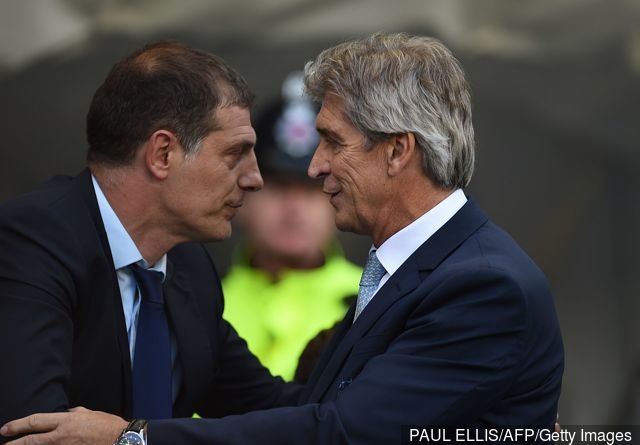 It feels like Slaven’s second season all over again

To be honest it feels like Slaven Bilic’s second season all over again!

I’ve always believed Pellegrini’s second season was crucial – the campaign where he went from stablising the club to pushing on into Europe – OR NOT!

It’s not happening and to identify reasons – although we all like simple answers – really is not that straightforward.

I was never going to be surprised by seeing beaten at Wolves despite the improvement at Stamford Bridge.

The minute I saw Antonio’s name missing from the team sheet I realised the game was up and that’s a frightening situation.

When you becoming reliant for a heart and soul in the team on one player who can genuinely cause big problems but has a regular  injury background that’s a huge concern.

Fact is however,  in the space of two games we have seen £7 million Mikey perform around,  however many times you want to count, more effective than the very poor Sebastien.

Then you see Ajeti arrive and you start to despair of a player who frankly has nothing in his game on the basis of what we’ve seen so far.

Maybe, and it’s a big one, our biggest problem is having a manager who is trying to play football above his station – Real Madrid and Manchester City could not be much further from West Ham United.

The reality last night and far too many times before is that too many of them just can’t get the basics right – touch, tackling, passing and pace were all missing.

Wolves are not a great side but they are a very good side who find their men, play with pace and possession and like to manage the game – things they do very well indeed.

We meanwhile look laboured and pedestrian in midfield where for all their virtues we have, in Snoddy and Nobes, a couple of midfieders now both aged 32 – not ideal in a Premier League where pace is utterly crucial.

We have been unlucky to lose the Fabianski but what was proved last night was that our problems were always deeper than the very dodgy Roberto.

Yes, there was a big lack of confidence through the team as a result but what we saw again last night was a lack of ability in other areas by several players.

So where do we go from here? Given that Eddie Howe remains unavailable those calling for a new boss could hopefully suggest where we go for a new manager.

Given the uncertainty of attracting the right man in a hurry I believe Pellegrini will be around for the next two games and both are winnable which would put us on 22 points at the halfway stage.

Nothing like good enough and in the end I have to believe this can only end way with Pellegrini being sacked.

The only question remaining is: WHEN?

10 comments on “Just one question left: WHEN will the axe fall?”