Juventus midfielder could move to West Ham for love

Posted by Sean Whetstone on April 23, 2020 in News, Whispers 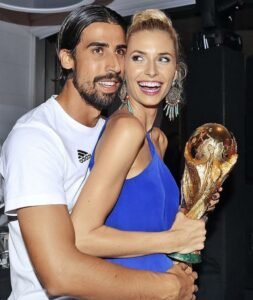 A report in the Daily Star suggests Juventus midfielder Sami Khedira West Ham bound this summer because of his fiance Melanie Leupolz has signed for Chelsea.

The German midfielder is being linked with a move away from Juventus after struggling with injuries this season.

Khedira was linked with Arsenal in the summer but a move to east London may now be on the cards instead says the tabloid.

Italian outlet CalcioMercato report West Ham could make a move for the 33-year-old, who has his heart set on a move to England due to the fact his partner has just signed for Chelsea women. Melanie Leupolz joined the Blues from Bayern Munich back in March, signing a three-year deal.

The midfielder is still at the German club until the end of the season allowing a free transfer.

As for Leupolz, she is looking forward to getting started in London by saying “I believe in what Chelsea are doing as a club and I am excited to be a part of that,” she said after his transfer went through. They want to win titles, and so do I. I also like the style of football they play.

“I have seen a lot of their matches and I think it’s the right club for me. The overall package worked.

“It was really cool conversations that I had with Chelsea trainer Emma Hayes and manager Paul Green, for example.

“I find it exciting that women and men are treated equally in marketing, for example. From the outside, both teams are on the same level; I don’t know that from Germany.

“I also watched some games through the FA Player app and believe that I can continue to develop my game there.”

If this report is to be believed then I am not sure Khedira’s motives are right, we need players who want to play and fight for West Ham and believe in David Moyes’ project rather than it being convenient that their fiance is based in the same city.  At 33 years of age his age is against him too, Moyes has repeatedly said he wants young hungry players so I am not sure he fits the right type of player.  The Hammer’s strategy is to try to bring down the average age of the squad. His injury record is also a concern and he would most likely command a large wage.  This report has agent planted story all over it so the chances of this happening are very slim in our view.