Karren Brady says she won’t walk away from West Ham 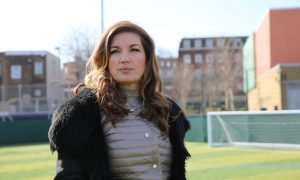 Karren Brady says she has no intention of walking away from West Ham telling a reporter she has never walked away from anything in her life and she isn’t going to start now.

The Baroness was doing an interview for the Guardian about a new TV show about the gender pay gap. The first lady of football initially refused to talk about West Ham saying “I don’t want to talk about West Ham, because this is something that is really important to me, and I don’t want to cloud the two issues. This is something I’ve done on my Sundays and days off to shine a light on the equality issues for women and I would like to focus on that.”

She also rubbished the claim her personal wealth is £85m “That’s complete rubbish, I’m not worth anything like that, that’s Wikipedia. There’s not much I can do about that.”

Asked whether she would consider quitting after recent trouble at West Ham Brady added: “I’ve never walked away from anything I’ve done, and I’m not going to start now. I genuinely believe the move we made to the stadium is the right one. That’s why we had 52,000 season ticket holders, and why 90% of those renewed.” Again, she says, we are not here to talk about West Ham.

The full interview can be found at https://www.theguardian.com/football/2018/mar/25/karren-brady-ive-never-walked-away-from-anything-and-im-not-going-to-start-now