Karren Brady to give it a year 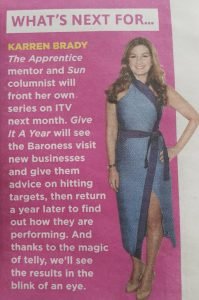 With an unfortunate title and very unfortunate timing, the programme will see Brady set tough targets for new businesses only to return one year later to see what progress they have made.

Outside of her directorship at West Ham Brady has a number of jobs including the BBC Apprentice, Sun columnist, Baroness in the House in Lords, Chairman of Taveta Investments Ltd (Phillip’s Green’s retail company), Non-executive Director of GUS Services UK Limited, Director of Be Equal Ltd,  frequent motivational and after dinner speaker, member of the Women and Sport Advisory Board and the Government’s Small Business Ambassador.

You can find the Baroness register of financial interests at the House of Lords at https://www.parliament.uk/biographies/lords/baroness-brady/4339

Last season West Ham accounts reveal the Vice Chairman was paid £868,000 by West Ham while her net worth is estimated to be around £85m.

6 comments on “Karren Brady to give it a year”