Thilo Kehrer is likely to come up against at least one of his Hammers team-mates when Germany take on England on Monday!

The new Hammers signing is in the squad for their clash with the Three Lions, which comes after England were relegated from their Nations League group after a dismal defeat to Italy on Friday. 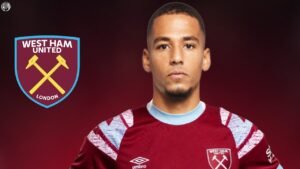 That Italy team featured Gianluca Scamacca up front, and now Kehrer could be taking on one of Declan Rice or Jarrod Bowen on Monday.

Kehrer played 45 minutes when Germany took on Hungary last week, and they were also beaten, losing 1-0 to the shock leaders of the group.

He has won 20 caps in total and will be aiming to make an impression against the Three Lions tomorrow night.

England boss Gareth Southgate will be hopeful of recording a much-needed victory, having gone on a terrible run; the Three Lions haven’t won any of their last five games, without scoring a single goal.