Posted by Sean Whetstone on January 21, 2016 in News, Whispers 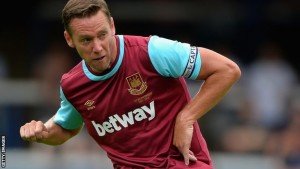 Leyton Orient have announced the appointment of Kevin Nolan as the new player-manager on a two-and-a-half year deal.
A statement on the O’s official website says “Kevin’s hunger, desire and passion to succeed at Leyton Orient, coupled with his experience, were key in the decision process and the Club believe they have the man to take Leyton Orient forward and improve the Club’s position.”

“Kevin will take charge of first-team affairs with immediate effect, overseeing his first training session tomorrow morning ahead of leading the side for the very first time in Saturday’s Sky Bet League Two game at Wycombe Wanderers. Everyone at Leyton Orient would like to welcome Kevin to the Matchroom Stadium and look forward to working with him.”

The 33-year-old departed the Hammers by mutual consent after four years, 157 games and 31 goals in a Claret and Blue shirt. Nolan is thought to have received a £1.4m pay off from the Hammers on his departure equivalent to 75% of his remaining £50,000 per week wages.