Konoplyanka: Irons have field to themselves 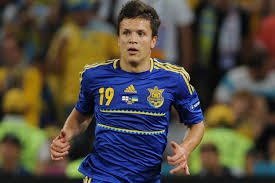 West Ham’s are believed to have the field to themselves as they pursue Dnipro winger Yevhen Konoplyanka despite reports of interest from Liverpool and Tottenham.

But the Hammers will almost certainly have to up their bid deom 12 million euros ( £11.5 million) from the 12 million  (£9.5 million) currently on offer.

Both Liverpool and Spurs have held a past interest in the 24 year old but ClaretandHugh has established that both club are currently not involved in pursuing the player.

News broke earlier that the Hammers had made a sensational bid to land the player as their marquee signing this summer after the 24 year old attracted interest from Liverpool in the January transfer window.

The player is under contract until 2015 at Dnipro – a club which has a reputation for fierce negotiating – and rejected all advances from Liverpool in the January window.

Indeed, the club president Ihor Kolomayskye even suggested the player would be better off playing for a London club as the capital is a better place to live.