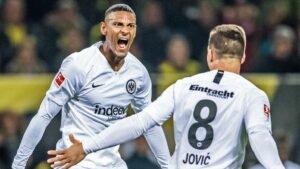 West Ham look like to miss out on a chance to land Luka Jovic on loan after his former manager Niko Kovac, has reportedly convinced him to join Monaco, according to a report from France Football.

The Balkan coach was instrumental to Jovic’s adaption to Frankfurt and his breakthrough at the Bundesliga club along with Hammer Sebastien Haller.  It’s unclear what Zinedine Zidane has planned for Luka Jovic and whether Real Madrid would be willing to cash in on the Serbian. If an offer of €50-60 million arrived, the club would recoup their investment.

The 22-year-old striker has been restricted to cameos since signing for Real in the summer, playing 90 minutes just once all season.

Jovic and Haller were strike-partners at Eintracht Frankfurt between 2017 and 2019, where they both made their names before earning big money moves.