Kral may have Moscow return worries 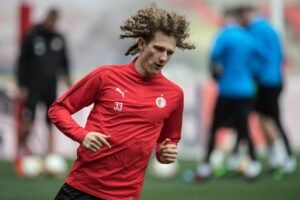 Alex Kral MAY be a very concerned young man right now and it’s to be hoped that David Moyes is having a heart to heart with the defensive midfielder.

For the player – on loan from CSKA Moscow – may be facing big worries of a return to Russia given the lack of minutes he has been given at West Ham and with his parent club’s country now at war with the Ukraine.

Indeed it’s impossible to know at this stage whether – should the situation escalate in eastern Europe – whether any football will be played in the country in the middle to long term.

Humanitarian issues don’t necessarily play a big role in footballing matters but the events of the last few days surely mean that Moyes will be ready to talk with the 23 year old and given Soucek’s lack of form perhaps be ready to given him a chance to prove his worth.

Start supporting Claret and Hugh today Claret & Hugh’s team of creators work with passion and pride to bring you the quality of content that keeps you coming back for more. Support for our creators, however big or small, will help us keep your Hammers content fresh, frequent and loyal to the club. £5 per month £10 per month £20 per month £50 per year
The executive committee will meet tomorrow morning to debate the best course of action given the current circumstances and will ‘evaluate the situation and take all necessary decisions’.

“As the governing body of European football, UEFA is working tirelessly to develop and promote football according to common European values such as peace and respect for human rights, in the spirit of the Olympic Charter.

“We remain resolute in our solidarity with the football community in Ukraine and stand ready to extend our hand to the Ukrainian people. We are dealing with this situation with the utmost seriousness and urgency. Decisions will be taken by the UEFA Executive Committee and announced tomorrow.”

Saint Petersburg was due to be the host city for the final of Europe’s elite competition, though this now appears to be in serious doubt.