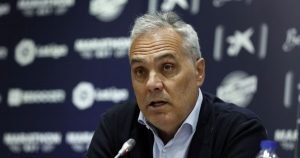 West Ham are in discussions with Athletic Bilbao to provide the opposition for the prestige pre-season friendly at the London Stadium in August.

The club was initially looking at Lazio as suitable opponents but that fell by the wayside when Bournemouth clinched a deal with the Serie A outfit.

Now we understand that although no final decision has been made, Bilbao are among the front runners to bring their squad to London for the fixture on Saturday, August 3.

Other names in the frame are believed to be Lyon and Marseilles but with Director of Football Mario Husillos and vice-chairman Karren Brady doing the negotiating, the Spanish outfit now look the most realistic option for the game.

Husillos has widespread contact across Spain and Bilbao – who finished eighth in the league last season – would be decent opponents for the Hammers.

Nothing is written in tablets of stone at this stage of proceedings but the club expects to make a decision in the near future.

One comment on “La Liga outfit in frame for prestige friendly”