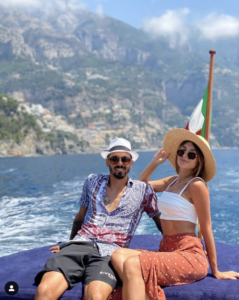 Manuel Lanzini is on holiday in Italy posting a photo on social media of him with his wife on a boat with an amazing background of Positano.

Yesterday a similar holiday snap by fellow Hammers teammate Felipe Anderson in Rome led to a report that the Brazilian was engineering a move back to Lazio. A suggestion quickly denied by club insider and Anderson’s brother Julian.

A quick look at the Italian map shows that Positano is close to Naples which home of Napoli so cue a report in the next few hours than Lanzini and representatives are speaking to Napoli with a view to a move.

Like all other Premier League players, Lanzini is enjoying three weeks holiday with his family and is due to report back to training at Rush Green on Monday 16th August for pre-season with the start of next season scheduled in for Saturday 12th September.

10 comments on “Lanzini arrives in Italy”